Marathon runners talk about hitting the wall.  This happens, usually around 18 miles, when your body wants desperately to stop the madness but you need to make it to the finish line (if it’s a race) or a couch at your house (if it’s a long training run).  To get past the wall I focus on simply putting one foot in front of the other.  As long as I keep moving, progress is made.  This is where determination, grit, and a high pain tolerance comes in handy.  Also, some well placed stubbornness.

This week I finally heard back from the principal at #3’s school.  Last week handed in his assessment which clearly states he will qualify for special education and details how intense the correct interventions need to be NOW so that he doesn’t slip into failure (I would argue a deeper failure).  At first I heard back nothing.  So, I e-mailed the special education teacher and principal to let them know the paper work had been turned in.  I asked a simple question, “Is anyone at our school trained in an Orton Gillingham method?”  Again, no answer.

Finally, yesterday the principal came into #3s first grade classroom while I was there and asked me to stop into his office when I got a chance.  Yeah!  Progress.  I really like this principal.  He is responsive to parents and truly a nice guy.  He has a great love of what he does and it shows.  A couple minutes later I sauntered down to his office with high hopes of having a great conversation. He would share with me how quickly the school is going to move because of the thorough assessment I provided. We would end it with a smile and perhaps even a high 5.  Go team!

He started by going over the qualifications for special ed. and I realized this was not going to be the conversation I had pictured.  First, there needs to be a discrepancy between achievement and ability.  #3 has a huge discrepancy.  He is labeled gifted by the district (and this was confirmed in his outside assessment) and is in the bottom 5% for reading achievement and phonemic awareness according to his psychological testing.  Second, his level of achievement must be very low.  Again, we have mastered this one…..he is below the 5% mark.  Third, he has to show no progress.

And this is where we hit the wall…..according to the principal.

#3 is holding his own, to a very low degree, in the classroom (I completely disagree with this).  In other words, he hasn’t failed yet according to the districts standardized testing.  He is on the low side, but until his standardized tests show that he is very low and he is falling further and further behind his classmates, no assessments will be made.  Its all about the number on one test in the Mondo Reading Curriculum.  What I say doesn’t matter.  What his classroom teacher says doesn’t matter.  What an educational assessment says…that doesn’t matter either.  He hasn’t failed enough.

I was stunned.  Am I supposed to hope for #3 to profoundly fail so that he can receive help?  Really?

Oh, but there is a solution the principal says.  The classroom teacher is going to do the Sonday System (Orton-Gillingham based) with him and another child.  I was speechless because how do you respond to insanity?

BTW, she has about 25 kids in her classroom, many of them with their own set of special needs: behavior, social, academic, highly gifted, poverty, struggles at home, etc.  She is supposed to figure out how to use an entirely different curriculum, find the time to do intense intervention (at LEAST 3 hours a week) AND teach the rest of the class all on her own?  Again, she’s excellent, but not a miracle worker.  This is not fair to her.  This is not fair to the classroom.  This is not fair to #3.  So much of what happens in the classroom for reading and writing does not apply to him, but he will be forced to sit there and watch his classmates understand and catch on to what is happening why he is continually learning “this does not apply to me” because the way reading is taught in the classroom is wrong for how his brain is wired.  Confusion sets in when a child is asked to do the classroom reading curriculum, guided reading and also a specialized curriculum.  That is 3 different approaches to tackle something that is already incredibly difficult…..when only one will work…..the other two only create anxiety and failure.

But, no help outside of the classroom will be given because he hasn’t failed enough yet. And I have yet to get an answer to my original question, has anyone in the school been trained in how to teach children with dyslexia?

I have hit the wall….in this case it’s the wall of crazy policies and bureaucracy in the district.  No help until your child is a puddle of tears on a daily basis, is so far behind his peers there is virtually no hope of getting caught up, and you and your child are both filled with hate and rage towards school.  Lovely.

Time to put one foot in front of the other.  Remember my form.  Breath.  Don’t freak out. Believe in myself.

I have trained hard for this.  I’ve been down this road before.  I know what needs to happen.  I have a good playlist.  I have friends and family along the road yelling encouragement, taking extra baggage, and handing me nourishment.  I have grit, determination….and let’s not underestimate my well-placed stubbornness.

I can’t see the finish line, but I know it’s there, and I will work with everything I’ve got to get there.  On the other side of the wall will be a child who believes in his academic capabilities and is given the chance to succeed.

Failure is not an option.

Answer: When you have some money burning a hole in your pocket and you have a lot of grit.

First, financials.  Many places that understand and diagnose learning disabilities from an educational point of view do not accept insurance.  Which is particularly maddening because schools will not recognize/treat/accomodate dyslexia because it’s a “medical diagnosis” in their view (I can really flip out about this subject….since when are medical diagnoses not valid in the eyes of a school?).  Insurance doesn’t agree with this and tells you learning disabilities (aka problems in school) is not their issue because its not anything medical/health related.  Financials are just another area that parents are tossed around from one party to another with no one wanting to take some responsibility to help….and you are literally stuck with the bill.

Second, grit.  To go through this process you need determination and grit to face reality.  Determination just get to the process moving and see it through.  Grit to face what comes after the diagnoses.

Last night I sat in the office of the same educational psychologist’s office that diagnosed #1 and #2.  This time I was there concerning #3.  I had assumed he was dyslexic for years but didn’t have a formal diagnoses, paperwork and testing to back me up.  After a couple months in 1st grade it was clear I was going to need this to get attention so his teacher (whom I LOVE) wouldn’t continue to assume he just needs more time to practice reading the same guided reading books over and over and over…which quite frankly is a waste of his time.

Because I’m not homeschooling #2 anymore, and #4 is in school this year, I have time to be in the classroom volunteering.  On Tuesdays I volunteer at a program called Rocket Readers in #3’s first grade classroom.  I have a small group of some of the lowest readers in the classroom….because that is where my child is.  While another little girl, who started at a much lower reading level than #3 continued to improve through September, October, November and now into December, my child stayed at the exact same level with absolutely NO IMPROVEMENT.  The little girl has begun to sound out words.  She has different decoding methods.  Reading is still hard, but she is improving.  #3 can read some of the books at his level, but he is reading the pictures and using his background knowledge.  He is not reading the words.  He is not looking at the letters, understanding the sounds and putting the sounds together into words.  He could read a little book about a fire station because he has been to fire stations, I have read him books about fire stations, he had a unit in kindergarten about fire stations, etc….not because he saw the word “h-o-s-e” and can sound it out using phonics rules and know this word is hose.  The teacher continued to tell me that he was smart, a good student and he just needed more time.

I’ve been down this road before.  More time would only let him fall through the cracks more.  Let him fail further.  Bring about frustration, anxiety and a hatred of school.

He needs to be taught with different methods, something that is compatible for the way his brain is wired.  A whole language and guided reading approach will never EVER work.  He needs a systematic approach with phonics (aka the Wilson Reading System).  It was time to get the paperwork to back me up.

As I sat in the educational psychologist’s office hearing the words, “Yes, he is definitely dyslexic.  Its very obvious.  No one can question these striking results.  He needs appropriate interventions immediately.  It is so good you came as early as you did.”  He is more severely dyslexic than #1, but not profoundly dyslexic like #2. If I want to pursue special education, he would definitely qualify. I was filled with a sense of relief.  I was right.  Its always good to be right, isn’t it?

Later, at 3:00 AM, came the sense of dread.  Holy crap.  I have 3 kids with dyslexia.  And I live in a district that refuses to help them.  What am I doing?  Will this be a big huge fight too?  Will this principal treat me the same as the last principal (horribly)?  Will these teachers dismiss me and the needs of my child?  Will this school tell me its not their responsibility to teach him how to read and write and if I want that to happen I better find a tutor or private school?  Will anyone listen to me and understand that teaching a child with dyslexia is not outrageous, its just different?  (insert string of words I’m not going to type out……)

And then the alarm went off.  If I would have had time to get new spikes for my shoes (St. Paul is covered in ice right now) this would have been the perfect morning to get out my angst on a long, fast run.  Instead I hit off and prayed for strength, determination and grit.

Psychology professor Angela Duckworth defines grit as “sticking with things over the very long term until you master them.” She writes that “the gritty individual approaches achievement as a marathon; his or her advantage is stamina.”

Its the one thing I actually do have.

Time to get those spikes for my shoes.  The road ahead may be treacherous, but with the right equipment, and a healthy amount of grit, anything is possible.  Especially when preserving #3s infectious personality is at stake. 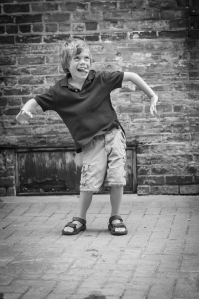